Every decision we make – from choosing to have pizza over a salad for dinner to deciding on which college to attend after graduating from high school – all contain elements of risk.

Our kids begin to take risks very early on in their development. As babies, they risked stretching their hands out into the unknown world – and were rewarded with new and exciting discoveries. As toddlers, they risked running off impulsively into the world to explore new things, and, fortunately, we were always there to make sure the risks they took did not put them in danger.

Taking these risks were necessary for our kids to learn about the environment around them, or they never would have figured out how the world around them works. But when did our kids STOP taking risks? By the teenage years, many of our kids become lackadaisical about occasionally getting out of their comfort zone.

It’s easier and “safer” to ignore taking safe risks that might encourage their mental, emotional, and/or personal growth. Even risks such as trying out for a part in the school play, studying super hard for an upcoming science test in order to try for that elusive A, or even daring to have an opinion that might be different from their peers seems like a huge (and worthless) risk for some tweens and teens.

There are several reasons older kids shy away from taking smart risks. These include:

But raising kids who are not afraid to take smart risks is so important for our kids’ futures. More and more employers report that the employees that take risks (whether or not those risks work out) are the ones who stand out from the crowd, get promotions, and become leaders.

On the other hand, if your child is more of the entrepreneurial sort, risk-taking is considered a necessity for this lifestyle, too. In addition, many older adults regret not taking more risks during their lifetimes.

According to Forbes Magazine, many retired people report wishing “they’d have taken more risks, settled less and spoken up more often”. So, if risk-taking behavior is so important for our kids’ futures, how do we teach this skill to them while they are young?

The Science Behind Smart Risk-Taking Behavior

Lev Vygotsky was a psychologist in the early 1900’s and was primarily interested in the process of how kids learn. He wanted to understand how kids went from not knowing how to do a certain task (such stacking blocks to look like a specific picture) to suddenly being able to perform the task all on their own.

After observing many kids in the psychological lab and in the natural environment, Vygotsky developed a theory that explained learning in this way: Kids begin an experience based upon their individual developmental level, but can suddenly “jump” in their learning to the next developmental level if given the opportunity.

He termed this learning opportunity the Zone of Proximal Development.

Every baby, toddler, young child, and teenager encounters these learning zones every day and have the opportunity to jump to the next developmental level if they take a risk to try something new.

For example, let’s say that a 12 year old child has always allowed her mother to wake her up in the morning, make her breakfast, and give her lots of reminders of what to do in order to get out of the door in time for school. Perhaps this child now feels ready to be in charge of her own schedule in the morning and decides to take the risk to set her alarm on her own, get up when the alarm goes off, make her own breakfast, and be accountable for getting to the bus stop in time for school.

By taking the risk to be in charge of her own schedule, this child goes from being dependent on her mom to becoming independent concerning her morning routine. This is an appropriate Zone of Proximal Development for a child this age, and this pretend child (theoretically) should be able to accomplish this new task because 1) the child was at the right developmental level to accomplish the task and 2) the child decided to take the risk to try the new life skill.

Once a child has decided to take the risk, what elements are needed for the child to jump to the next stage of learning? Vygotsky believed that when a child is in the Zone of Proximal Development for a particular task, providing the appropriate assistance will give the student enough of a “boost” to achieve the task. This can be done through 2 sources:

This partly explains why some kids do well in school while other kids struggle. The kids in the classroom who are at the appropriate developmental level, who listen to the instruction given by the teacher, and then take the smart risk to try out the new skill or strategy being taught are then able to “jump” to the next level of learning.

The kids that are behind (are not in the appropriate starting point in the Zone of Proximal Development), have difficulty following along with the instruction, and/or are too scared or intimidated to risk trying out the new skill or strategy and will not make this “jump” in learning.

The Downside To Smart Risk-Taking Behavior

The bad news is that while risk-taking behaviors can reward our kids with fulfilling experiences, these same behaviors can also just as likely lead to disappointments.

Remember that old saying: You win some and you lose some? Just simply deciding to take the risk to try something new does not guarantee that the risk will work out. No one is perfect – which means that things just aren’t going to work out for us all the time.

We need to teach our kids that it’s healthy to lose, because oftentimes we can learn more from losing than succeeding.Most people think that there are only two options to taking risks: to win or to lose. But truly successful people know that there are two better options: To win or to learn.J.K. Rowling submitted her original manuscript for Harry Potter and The Sorcerer’s Stone almost a hundred times before it was accepted.

Steven Spielberg was rejected TWICE by the University of Southern California’s School of Cinematic Arts before he was accepted (as their way of saying “Oops, I guess we were wrong about you” the school later built a building on campus and named it after him).

Michael Jordan was cut from his high school basketball team years before he became one of the greatest basketball players of all time.

What if they had just given up the first time they were rejected?Instead of giving up, they learned from their experience, and gradually improved for the next time they took a risk.

Eventually, all their long history of taking smart risks paid off – big time. And we need to teach this important mindset to our kids if we want them to become smart risk takers who stand out from the crowd as adults.

So, if a child is at the appropriate starting point at the Zone of Proximal Development, and they are willing to either win or learn by taking the risk, how do they know if the risk is a smart one?

Fortunately, we can teach our kids a strategy to follow in order to decide if a risk is a smart one or not.Two researchers investigating what it means for kids to take smart risks – Susan Davis, Ph.D., and Nancy Eppler-Wolff, Ph.D – explain that a good risk, “is an action, activity or behavior that, precipitated by careful thought, involves a ‘leap’ toward the edge of safety and danger.” Sounds kind of like they’re talking about the Zone of Proximal Development, doesn’t it?

After working with kids for many years, these researchers believe that positive risk taking behavior CAN be taught and strengthened. I believe, after reading much of their work, that we should teach our kids the following questions to determine whether or not the risk is worth taking: If the answer to the first 4 questions is “yes,” then the risk is probably not a good idea. If the answer is “no” to these first 4 questions and they have thought through the last question, then the risk is likely a smart one.

Many kids these days shy away from breaking out of their comfort zones, mostly due to previous negative experiences when taking risks in the past; however, modern parents are quickly realizing that if our kids are going to be successful adults, they will need to learn to take smart risks in order to stand out from the crowd.

Remember the advice that Mark Zuckerberg gave to a bunch of budding, young entrepreneurs at Y Combinator’s Startup School in Palo Alto, California;

The biggest risk is not taking any risk.

Just imagine what greatness your child is capable of if they are allowed to believe that taking a risk can lead to winning – or learning.

So what should you do now?

Download the free resource that goes along with this article. It’s called “The Step-by-Step Checklist to Help Your Child Take Risks the Smart and Effective Way.”

This guide will provide you with specific strategies for helping your child overcome their fear of taking smart emotional risks so that they can flourish when pursuing their natural talents and abilities.

Enter your email address in the box below to download the guide.

Next…SUBSCRIBE! Pick your favorite way to stay in touch. You can: 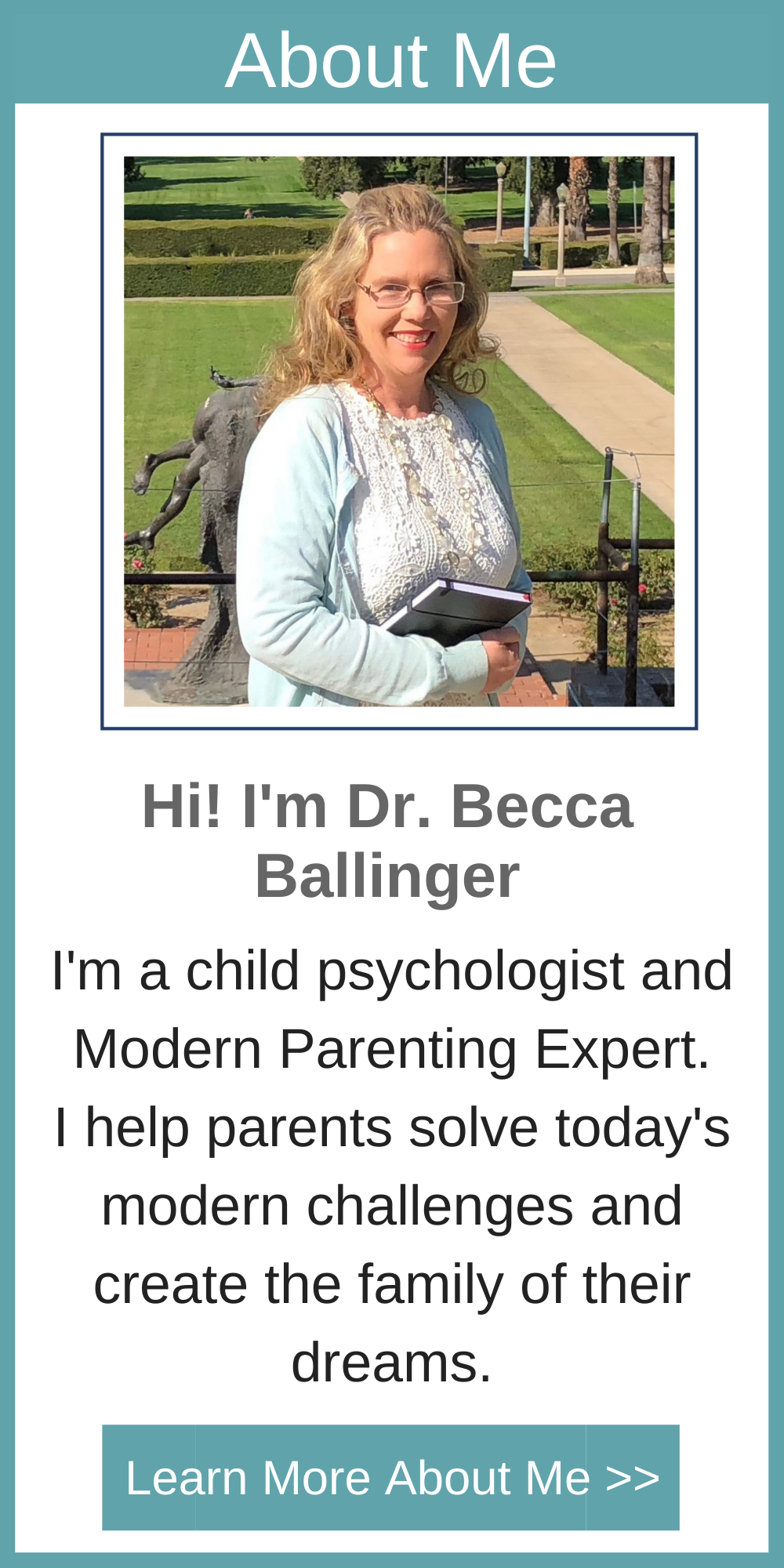 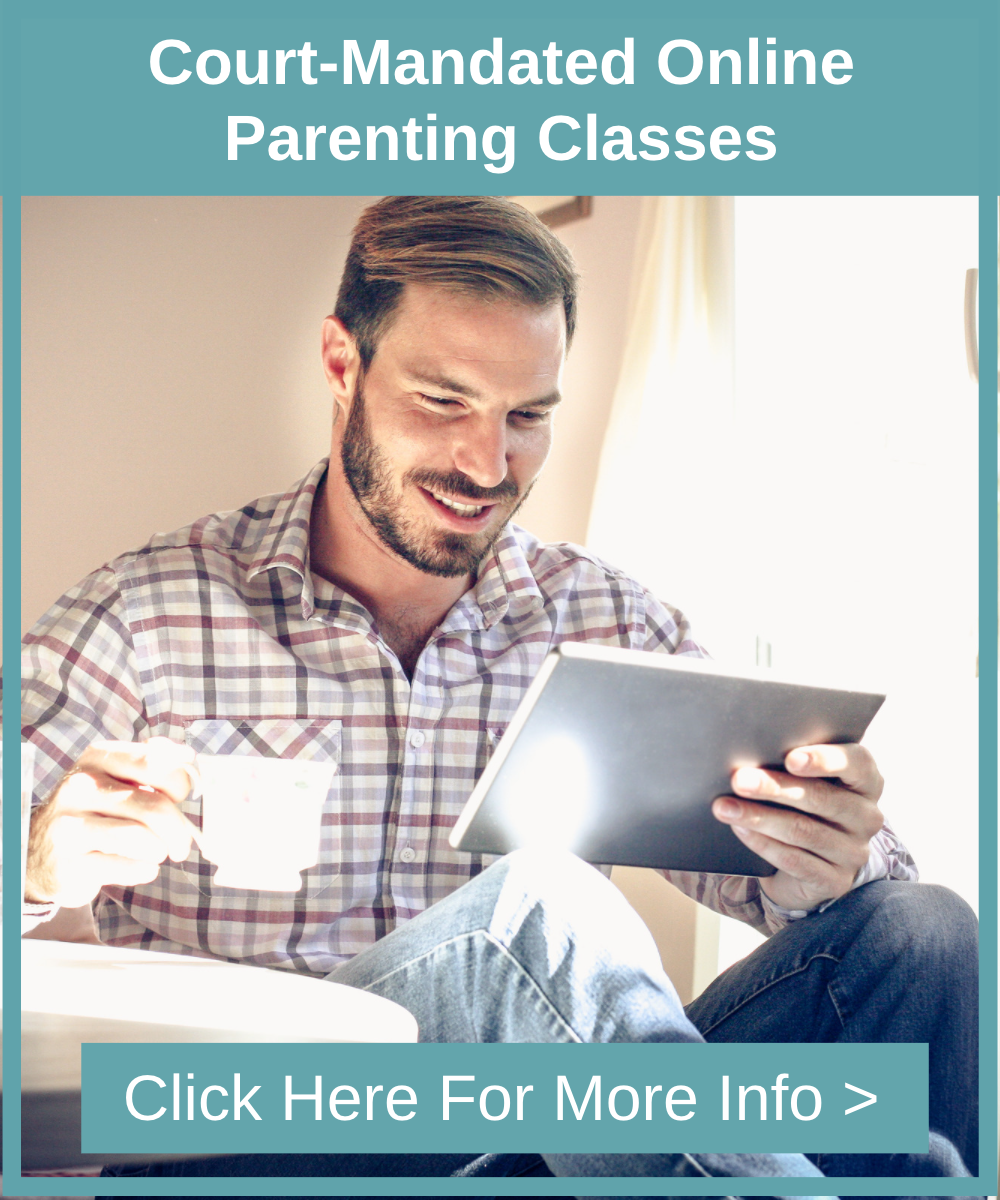 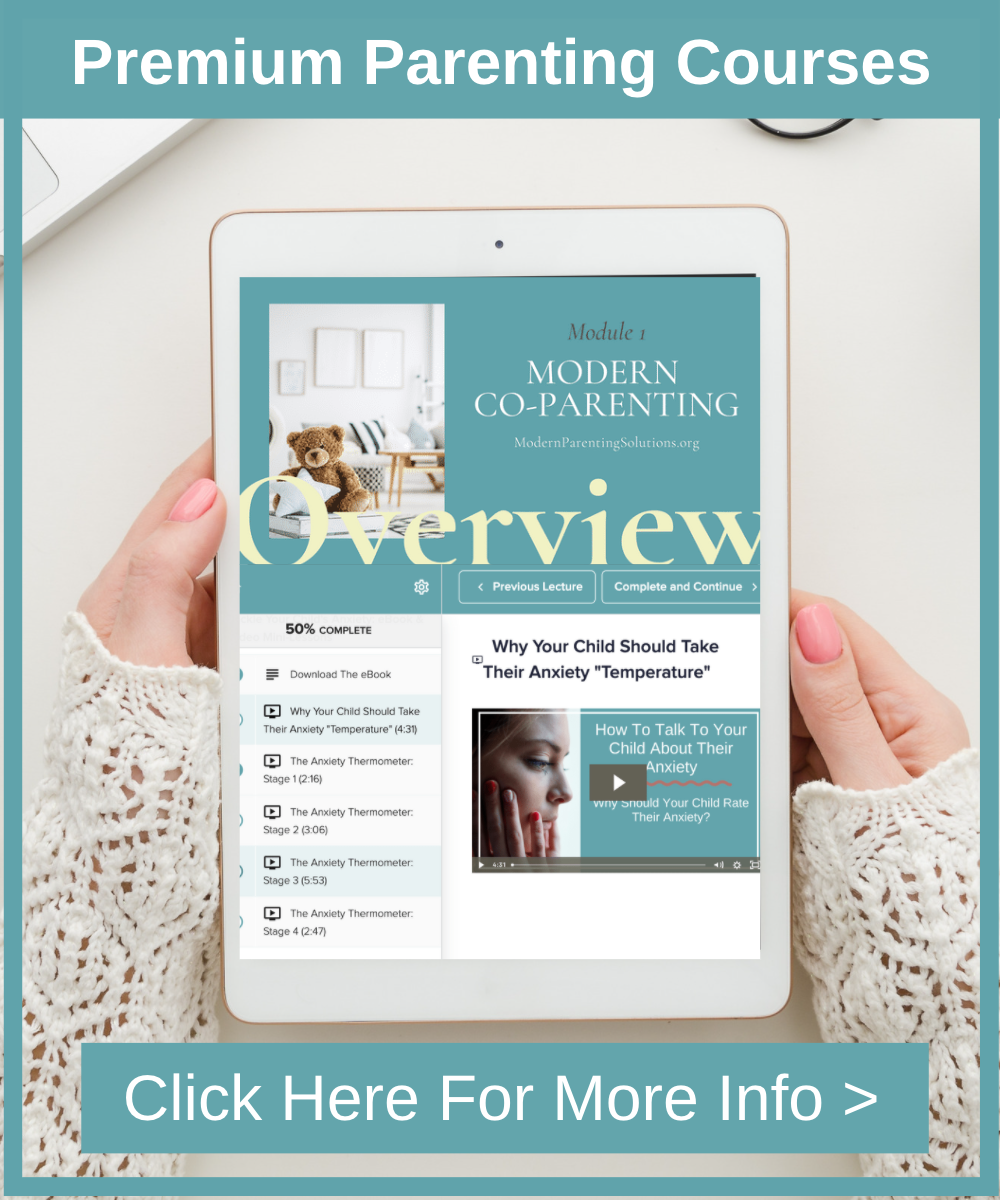 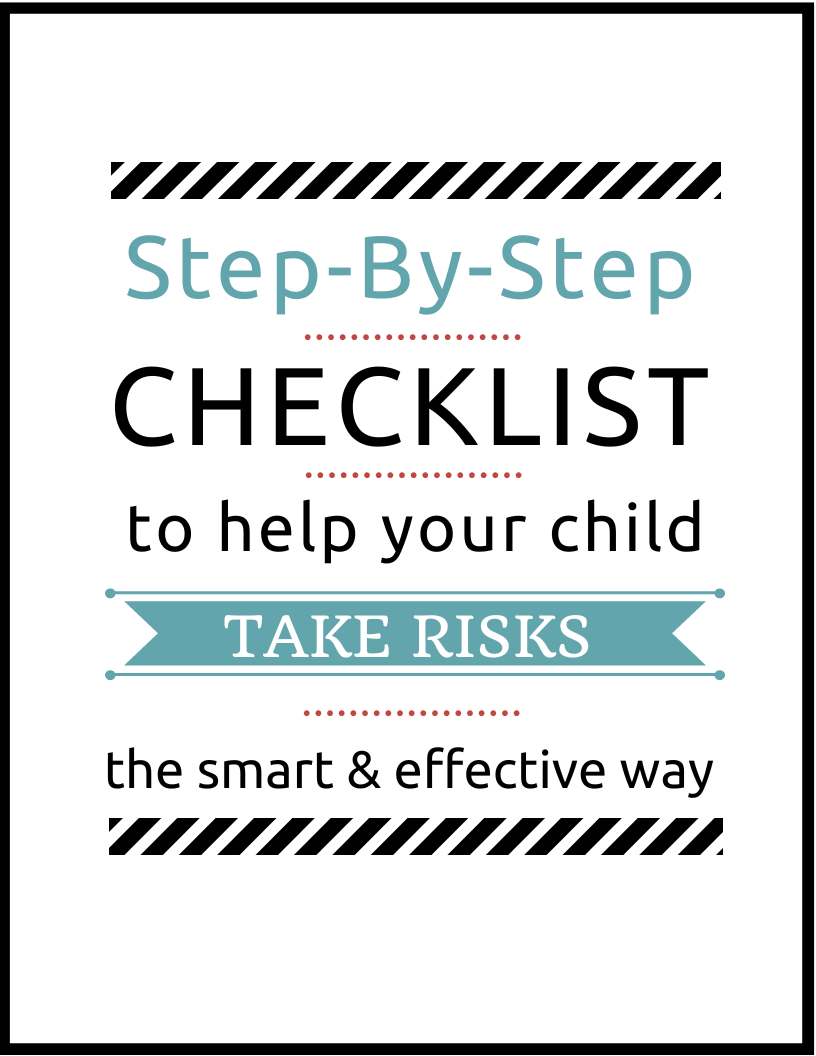